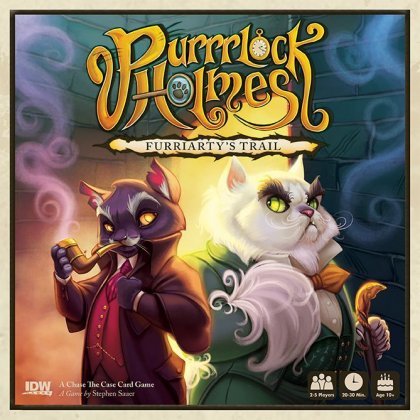 Furriarty is terrorizing London, and it's up to Purrrlock Holmes to stop him before he completes his plans and escapes! However, Purrrlock cannot do it alone and you, as a newly inducted Inspector at Scotland Pound, must help bust members of Furriarty's gang in order to help Purrrlock get closer to the bewhiskered baddie that's been bullying all of Baker Street.&#10;&#10;In more detail, each player in Purrrlock Holmes: Furriarty's Trail draws a hidden suspect card. Players take turns making guesses using a &quot;clock&quot; mechanism about their unknown suspect&rsquo;s identity. The other players (who can see every suspect but their own) will tell you whether you've got a lead on your suspect; if not, it's a dead-end. Figure out enough leads to deduce the suspect's identity, and you get to snag a clue that leads to Furriarty. Each clue is labeled with a variable number of victory points. Every round, Furriarty pads his way closer to escape, putting tension on the players to guess &mdash; quickly! &mdash; to solve the case. If you can deduce enough suspects and collect enough paw print tokens, you may be able to overtake Furriarty before he scrams.&#10;&#10;Get ready, Inspector, as the game is officially afoot &mdash; or a-paw, if you will...&#10;&#10;Components:&#10;&#10; 60 Clue cards&#10; 5 Player boards&#10; 5 Card stands&#10; 18 Paw Print tokens&#10; 2 Furriarty/Award tokens&#10; 1 Rulebook&#10;&#10;&#10;&#10;&#10;