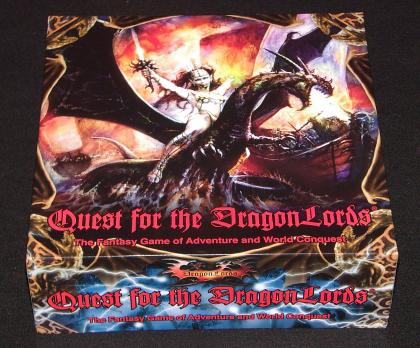 Quest for the DragonLords (Second Edition)

Quest for the DragonLords is a world conquest game where cunning is required to best manage your forces comprising of fleets and armies. Your goal is to dispatch your opponents’ King or Queen! You start the game with a few powerful leaders such as Wizards and a King. A DragonLord commander allows a player to teleport and attack anywhere in the known world! The fear generated by a DragonLord with its weapon of destruction – Dragon fire, reduces the fighting effectiveness of enemy forces.

The adventure continues in the wastelands comprising of various places of commerce such as villages, shrines, witch dens, Dragon Lair, Teleportal and oracles. Here, quest parties may consult with witches to gain tools such as a DragonOrb to complete your quest or visit the Oracle who will enlighten adventurers with words of wisdom from the gods.

So what’s new?
The second edition of “Quest for the Dragonlords” has been re-designed with all new graphics and subtle changes to game play to deliver a much more intense gaming experience. The gameboard has been completely redesigned with lush graphics to bring the adventure element of the game to the forefront. Each player can hire heroes to help their quest parties overcome difficulties on the various quests.
The prophecy cards allow players to interact with each other during the adventure phase. The prophecy cards give clues to the players where powerful treasures may be found but they also allow players to provoke the various companions of the other players to betray their quest parties. There are 20 beautifully illustrated quest cards of drooling monsters and demons of darkness for your quest parties to overcome.
The manufacturing process has been improved from the first edition to provide highly detailed plastic miniature Orcs, Elves, Dwarves, Barbarians, Longships and DragonLords. Each civilization now has a completely unique set of spells available to their Wizards. Each player when in favour of the gods of power may gain mana. Mana is now required to cast spells and may be redeemed for powerful scroll cards that can greatly affect the outcome of battles.
Drawing on the legends of Norse mythology and the intense graphics provided in the second edition of “Quest for the DragonLords” – A Fantasy Game of Adventure and World Conquest provides a very rich atmosphere. If you are looking for a game to provide an evening of strategy and adventure for your favourite knights of the round table, Quest for the DragonLords will be a feast for your friends.

There is an expansion available, called Crystal of Power, which adds the Amazones and the Nekromants, for the 5th and 6th player. Also some colored Power crystals wait to dicover on your quests through the lands.