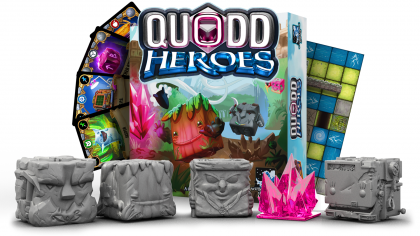 Quoddria was a peaceful world, its cube-shaped inhabitants were generally happy and content in their seaside cities, quaint forest villages and even in their vast and deep and bejeweled cave systems. Then the sky began to fall and everything changed. Fire streaked across the sky raining disaster upon their world. When the fires and earthquakes dissipated and the sky once again cleared, the inhabitants of Quoddria emerged from hiding and began to rebuild their lives. Amid the fragments of meteors in the ruins of towns and villages, altered landscapes and vanished seas, the people encountered wondrous crystals. The inhabitants of Quoddria soon discovered that crystals had miraculous properties, bringing new life and unlocking incredible powers in some who encounter them.&#10;&#10;In Fringe, a town on the edge of a valley that was once a vast inland sea, Quoddrians are gathering to rebuild and have discovered an ancient lost city in the dry seabed nearby. Brave heroes, you are called to adventure! Do you have what it takes to challenge the wild and dangerous new world and return with the mysterious crystals and wondrous relics of a lost civilization?&#10;&#10;Quodd Heroes is a fast-paced modular, scenario-based adventure board game system that plays like a combination of Super Smash Bros., Mario Cart and Legend of Zelda all wrapped into one. Whether it&rsquo;s a simple point-to-point rally-style race, capture the flag or a quest to uncover hidden secrets each game is filled with unexpected events, lots of player interaction, ever-changing boards and a dash of mayhem.&#10;&#10;The core mechanism in Quodd Heroes is something you&rsquo;ve never see before. Each player controls a different cube-shaped character miniature and player board. You then assign a different movement skill to five of the six sides of your character (the sixth side has an ability unique to your character). When you begin the movement phase on your turn you &ldquo;tumble&rdquo; your character into an adjacent space and perform the movement skill associated with the face-up side of your character. Skills include: Tumble, Jump, Slide, Diagonal Slide, and Dash.&#10;&#10;While you work to complete the scenario&rsquo;s objective(s), either on your own or cooperatively, game boards which are laid out in grids present obstacles like walls, raging rivers, chasms, moving platforms, rotating board sections, trap doors, tunnels, teleporters and more. As you navigate the world you create new obstacles and shortcuts while battling your opponents by pushing them into pits, blocking their paths and fouling their plans.&#10;&#10;As you explore the world you will find food, runes, items and pets in the form of cards. These cards enhance your abilities, slow your opponents and modify the world around you. If you use your movement skills and cards strategically you'll emerge as the greatest of the Quodd Heroes.&#10;&#10;A turn in Quodd Heroes involves: &#10;1. The Main Phase: Players are required to make exactly one move, they may also play any cards they wish (or save them for a nasty combo!)&#10;2. Exploration Phase: Draw cards from the common deck according to your exploration upgrade level. Cards are very powerful but you may not have more than five &#10;cards in your hand at the end of your turn.&#10;&#10;At the end of each round is a training phase where each player chooses of their 7 two-sided upgrade tiles to apply to their character.&#10;&#10;