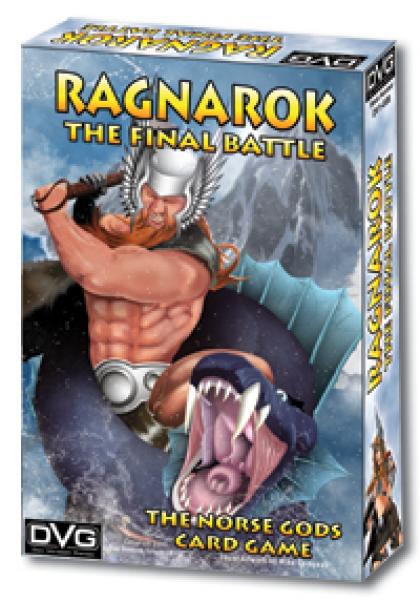 Ragnarok is Upon Us!

You gaze across the once peaceful lands as you strap on your heavy armor and weapons. The leather creaks and steel clangs as you gird yourself for war. Overhead, storm clouds gather and the lightning slams into the earth in great forking bolts all around you. A howling north wind scourers the lands clean in preparation for the final conflict that will decide the fate of the world.

You know in your heart that of all the battles that have come before, this will be the last, and greatest. This is Ragnarok, the final battle between the gods of men and the dark forces of the night.

With a wave of your massive hand you summon forth the heroes and Valkyrie that will fight at your side. The ground trembles under the footsteps of your mighty foes. There they are! On the horizon, grim giants, fell beasts, and the undead of countless battlefields approach in unending waves. Above the clatter of their weapons and armor a clear deep note pierces the sky. It is Heimdall’s horn! He is calling forth the gods and heroes to stand fast at the rainbow Bifrost Bridge and do battle.

Without hesitation, you stride forward to stand at his side with your brothers and sisters. You are an Aesir, a god and defender of humanity, and this is the time of legends!

A few years ago, we realized that the core action-reaction card mechanic of Down In Flames would also be perfect for other interactive combat situations, but we could never think of the right setting. Finally, a couple months ago, we came up with the idea of designing a game based on the Norse gods, their foes the Jotun, and the mythical battle to end all battles, Ragnarok. In this game, we’ve given the action-reaction system a twist in that the turn sequence is interactive, so as each attack is played, the next card played is actually a counter-attack that can inflict damage. This makes for a very intense battle system where every card can both attack and defend.

In this fact-paced card game, you take on the role of one of Norse mythologies greater gods such as Thor, Odin, Heimdall, or one of their Jotun enemies like Thrym, Fenrir, or Loki.

Once you are girded for battle, you will hack, slash, thrust, and grapple your way to victory!

Ragnarok is designed and packaged to be an economical social game. Instead of our normal 9” x 12” box, this game comes in a 4” x 6” box. This is an ideal game for people who would like to socialize while playing a game. Each game takes only 30 to 60 minutes, so the game play is fast and furious.

The game’s components are designed to be language independent. The card titles are in English, but all the other game information is represented with iconic symbols and numbers.