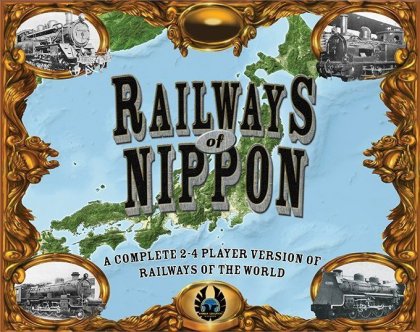 Description from the publisher:&#10;&#10;Railways of Nippon is a self-contained 2-4 player version of (but not a re-implementation because it also integrates with) Railways of the World with a new map of Japan designed by the Japanese game designer Hisashi Hayashi. The game takes place during Japan's rapid industrial growth during the Meiji era, where you take the role of one of the entrepreneurial railroad baron of that time.&#10;&#10;You plan and lay track, upgrade your trains, sell goods to distant cities, and use operation cards to become the richest railroad baron of Japan! Balance your budget wisely, since taking too many bank bonds can ruin your business over the course of the game. Also, watch the competition closely because you can only use the track that you laid down personally to trade.&#10;&#10;Since the island of Japan is mountainous and narrow there is often not enough space for everyone to lay their track where they want. Foreseeing your competitors moves and well thought out moves will ensure you an undisputed railroad empire!&#10;&#10;It was also released as an expansion, that required components from the base game: Railways of the World: Nippon Expansion.&#10;&#10;