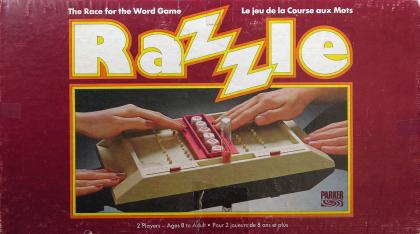 Two players compete to score points by finding a four-letter word from six letters on dice, or challenging the opponent to do so. Each victory moves the dice carriage one space closer to the goal, and reaching the goal scores a point. Ten points wins. Sort of a cross between Boggle and tug-o-war.

Razzle is a word dice game.