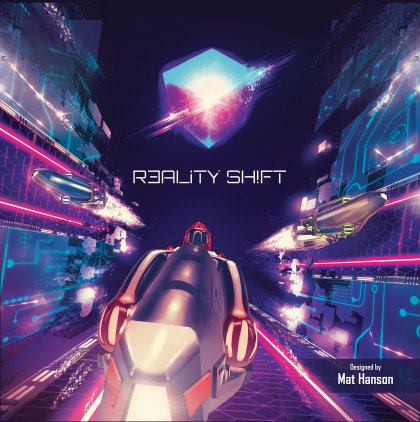 Race. Hack. Win.&#10;&#10;In Reality Shift, race across large magnetic Reality Cubes while hacking into them to change their positions.&#10;&#10;Move your light bike across any side of the cubes to find the best path to the finish.&#10;&#10;Shift reality by hacking the track to slide, rotate, flip and tilt the Reality Cubes. Block your opponents&rsquo; paths, make your path to the finish shorter, or crush your opponents!&#10;&#10;Reality Shift is a fast-paced 3D racing game for 2 to 4 players set in a retro virtual reality world. The racetrack is made of cubes whose magnetic facings have different paths on them. Your light bike is not constrained by gravity. Your magnetic figure can use any accessible path on the tops and the sides of the cubes.&#10;&#10;Being fast is not enough though. You will be able to play a card each turn that will move a Reality Cube, creating a track that is always shifting. Don&rsquo;t have a path to the finish? Transform the board to make one. Is an opponent in the lead? Change the track to block their way or just crush them with a Reality Cube, forcing them to respawn at the start.&#10;&#10;Be faster, smarter, and more ruthless than the other racers to win.&#10;&#10;&mdash;description from the designer&#10;&#10;