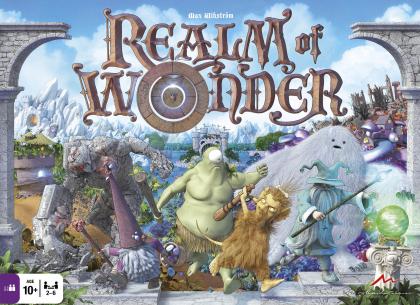 Realm of Wonder puts 2-6 players in the boots of fantasy characters from a yeti to a rockman in a fantasy world with spinning continents. During your journey, you need to achieve your scenario objective, then return to the king's castle in the middle of the board.

Each turn starts with bidding to see who will first use magic and who will first move on the board. During the magic phase, players take turns trying to harm opponents with nasty magic tricks or enhance their own character's abilities. Movement takes place on a game board divided into three continents, and the two inner continents can be moved via magic stones to hinder an opponent's movement or allow a player access to blocked areas. During the journey, players need to combat opposing figures, destroy monsters, find treasures that might boost character abilities, and gain or invade resource pools to fuel a player's economy.

Realm of Wonder mixes area control, dice rolling, and bluffing. The game is beautifully drawn with a set of miniature figures for each character. Random elements can be minimized with an alternative rule set that makes this a great game for both younger people above 9 and hardcore gamers alike. Playing time with six players should be less than an hour.