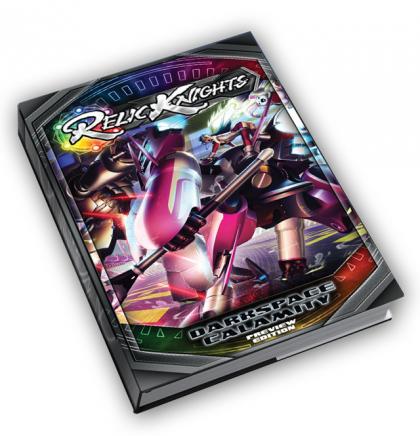 Relic Knights ™ Darkspace Calamity is a fast-paced strategy battle game by Soda Pop Miniatures and published by CoolMiniOrNot, for 2 or more players, pitting the heroic forces of the Relic Knights against each other in a battle for survival and the fate of the galaxy

Take control of one of 6 factions with wonderfully detailed miniatures, as you use a unique card draw mechanic to power your special abilities and defenses!

Each game lasts about an hour for the Faction Starter size, and how you manage your abilities and resources (represented by the Esper Cards) will determine the fate of the universe! Bluff your way to victory, or hide your strength till the critical moment - it's fast paced strategy and anime action!

Made from high grade plastic, each wonderfully detailed miniature demonstrates the craft and care that Soda Pop Miniatures has put into bringing its anime themed world alive with its highly detailed heroes, minions, monsters, and machines that make up the Relic Knights Universe.

Augment your forces with heroes and warriors to fight even bigger battles, as the universe of play expands. Easy to collect, fun to play, wonderful to paint, Relic Knights has something for everybody.