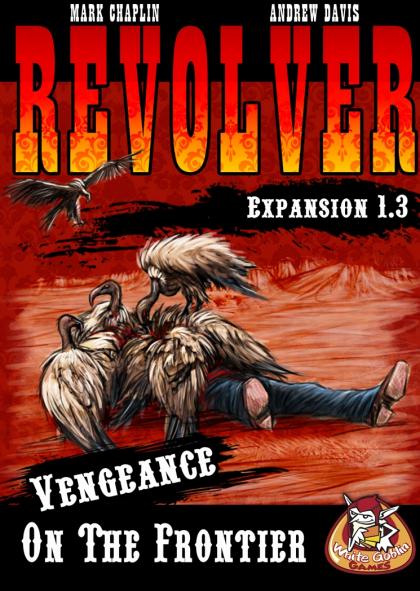 Revolver Expansion 1.3: Vengeance on the Frontier

Greetings to ya. Let me take your coat and hat, pilgrim – then pull up a pew while I have fetch ya some sarsaparilla to chase away the bitin' cold, but mind, I don't take me any sass.

Shucks, I don't get me many visitors this far up the creek, especially when accounting for the "injuns". Could be that hereabouts I'm as popular as a wet dog at a parlour social. I've been up here in the mountains so long that I know all the bears by their first names.

So, you folks wanna hear me talk about this newfangled card game expansion? Must be crackers – I doubt you could cut a lame cow from a shade tree. You'll not live long in these wicked parts. Saying that, prolonged life has ruined more men than it ever made.

Well, unless you is planning on joining me for a rendition of "Green Grow the Rashes", I suggest we get started.

Revolver: Vengeance on the Frontier – the third in a series of expansions for Revolver – gives both players the option of buying cards from a separate, neutral Frontier deck with dollar coin tokens earned during the main game. Many of these cards feature a choice of useful options. Others are threats which can be played by either player, such as "Old Three Toes", a monstrous grizzly bear that is particularly difficult to kill.

The expansion further elaborates on the new winning condition added for McReady in Revolver: Hunt the Man Down, and many of the cards are also useful to both players at the San Manzanillo prison location.

Revolver: Vengeance on the Frontier also includes new cards for both players that give them the opportunity to customize their decks, bringing new variety and replayability to each game.