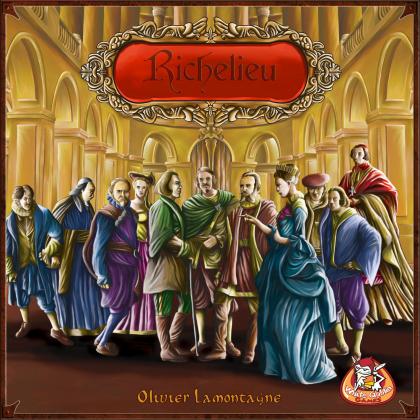 Paris, XVIIth century. Cardinal Richelieu is centralizing power in the name of King Louis XIII and defends France against those he considers its enemies: the English, the protestants, the Habsburgs and French nobles scheming against him and the crown. Will you side with the cardinal, or will you be seduced by the promise of wealth and power from the queen and foreign nations? Be warned that the cardinal will hinder too ambitious intrigants. Become an influent noble in the court by accumulating prestige and favors. The player most helpful to each faction is also rewarded at the end of the game.

Richelieu is a tactical game with a lot of bluff and interaction, with intrigue everywhere. Every instance of intrigue will pit Cardinal Richelieu against his enemies. The players are nobles taking sides in these intrigues by placing agents with secret values and thus influencing the intrigues. Will you choose to side with Richelieu or the conspirators – or perhaps even help both? You can keep your support secret or make it directly known to others when placing your agents at the intrigues. It costs money to place agents, but the winning faction gives higher rewards for the players that helped them the most.

The Cardinal's mood is influenced by his success or failures, and he will become intolerant against too influential nobles (i.e. the players), who will have one fewer action to spend during a turn as a result.

There are many possibilities and opportunities to score points for the player who foresees and thwarts the plans of other players. During the game, you will constantly have to choose your side: Will you side with the Cardinal, or will you be seduced by the promise of wealth and power from the Queen and from foreign nations?