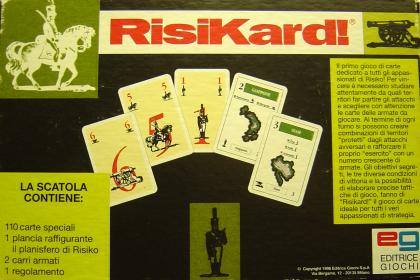 Risikard is similar to Risk in that players are warring over global territories. However, in Risikard, battles are resolved by use of cards, instead of dice, and the board serves more as a visual indicator than a gaming area.

The game consists of 1 small map board, 2 tank pieces, a rule book and 110 cards.

There are 42 Territory Cards, each representing one of the areas on the map. Of the information on these cards, the most important are the number 'Value', of which a certain amount are needed to win the game, and the 'Winning Symbol' (explained below). There are 54 Army Cards and one Wild Card. All army cards have symbols representing either infantry, cavalry or artillery and a value from 1-6. There are also 13 Mission Cards, which remain hidden to others throughout the game, and state the formula one must obtain to win.

At the beginning of the game, territories are selected one at a time and starting army hands and a mission card are drawn.

Each turn then commences with an attack by declaring war on an adjacent territory. Cards are revealed from the attacker and defenders hand and whoever has the higher number wins, the wild card trumping any other value. When one player wins two battles, that person gains the other's territory card.

The second stage of the turn is the protection of territories. In this turn you may choose to defend territories by presenting three Territory Cards with different 'Winning Symbols' from the same continent (also known as a "set"). Protected territories may not be attacked but also can't aid to increase your number of army cards. Army cards in hand are then discarded and the same number of cards are drawn at which point the player may attack again.

In the final stage of a turn, the player adjusts his/her hand based on the number of sets that aren't part of protected territories that they control.

The game is won when a player fulfills the requirements of the 'victory formula' stated on his/her Mission Card. An example of this formula is you must control all of Africa, Oceania and you must have additional territories totalling a value of 12 or more. Players can be eliminated from the game prior to the game's end.