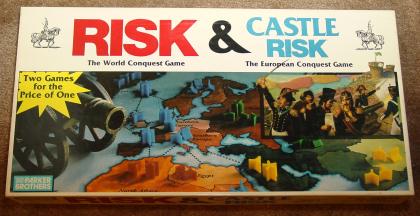 Risk and Castle Risk in one box.

Each player starts out with one castle on the game board. Your objective is to capture all your opponents' castles, so that you are the last player remaining in the game.

This game in the Risk family of games is markedly different than the original Risk. The combat mechanism is the same but players receive armies at the end of the turn, not the beginning (the sole exception being playing a Reinforcements card). The game has no territory cards, and one does not get armies based on the total number of individual territories. One gets armies for regions controlled and banners in one's castle only. Each player starts with a single banner in his castle but also takes the banners of any captured castles.

The cards act as die modifiers (General and Marshall), allow attacks one would not normally be able to make (Admiral), get armies at the start of a turn (Reinforcements), force temporarily non-aggression pacts (Diplomats) and look at another player's cards, discarding one in the process (Spy). The Spy card can also be used to defend against another Spy.

Players are given army units to place onto the map of the world. Players use units to attack other players' positions, hopefully with superior numbers. Combat is a simple dice rolling affair that stresses attrition, and reinforcements are given to players who collect sets of cards.

Europe is your battleground and enemy castles your target in this thrilling game of military strategy. Your tactics range from highly planned to hit-and-run, as you deploy your troops: Choose from Spies, Generals and Diplomats to carry out your battle plans. Call out your Marshalls, Reinforcements, the Admiral, and, just once in the game, your Hidden Armies. Now roll the dice to see who wins each battle.