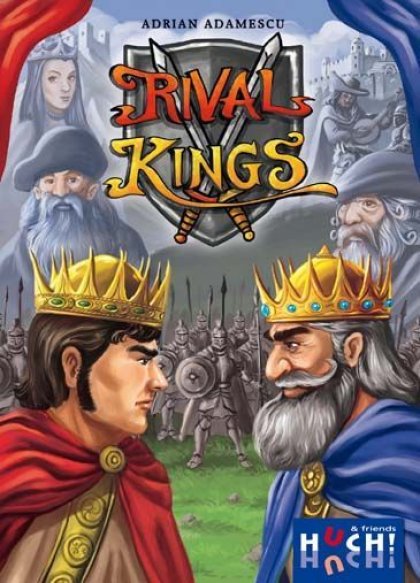 In Rival Kings, two royal families compete for the country and its people. High-ranking personalities prevent the members of the opposing family from using their subjects for their own purposes and from erecting valuable buildings &mdash; but everything comes at a price. Who will lead his family to fame and honor?&#10;&#10;Text from publisher:&#10;&#10;The position of the leader of the empire is vacant. But who has what it takes to become the new king? In order to increase their power, the contenders for the throne rally the country and its people around themselves.&#10;&#10;Who will make the best use of the influence of important personalities and engage his competitors in conflicts without suffering damage himself? Rival Kings is a stalwart card game from HUCH! &amp; friends.&#10;&#10;At the beginning of each cycle, each player chooses one Character card and places it face down in front of him. Once all players have done so, they turn them over simultaneously. The Character cards determine the order of play, the number of possible actions, and potential conflicts. Low-ranking characters have more actions at their disposal, but they may act only after the higher-ranking characters. In addition, each character may come into conflict with certain other characters. When this happens, the higher-ranking character may take one action from the inferior character and carry it out immediately; this action is then no longer available to the lower ranked during his turn.&#10;&#10;After the Character cards have been played and potential conflicts have been resolved, the action phase begins. Now, depending on the action, a player can take money, get rid of Conflict markers, recruit subjects, or buy a building. Players try to secure good combinations of buildings and subjects for themselves in order to get a high score in the end. Besides this, the subjects recruited during the game provide different advantages that can have a crucial impact on the course of the game. However, only one subject is active per player &ndash; if a new Subject card is added, it covers the player's previously laid-out bonus.&#10;&#10;The game ends as soon as one of the card piles has been depleted. The player who has collected the best combinations and has as few Conflict markers as possible lying in front of him has the best chance of assuming the throne.&#10;&#10;