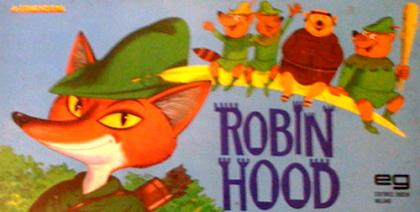 1970 Robin Hood boardgame by Editrice Giochi. The game included a 3d representation of the Sherwood Forest, along with a part of the Nottingham castle.

Players have to actually shoot the Nottingham Sheriff figure which walks through the forest. Four small firing crossbows are included in the game.

The game was marketed by Editrice Giochi as a "3Dimensional Game", because of the Sherwood forest setting which has actually to be built before playing.