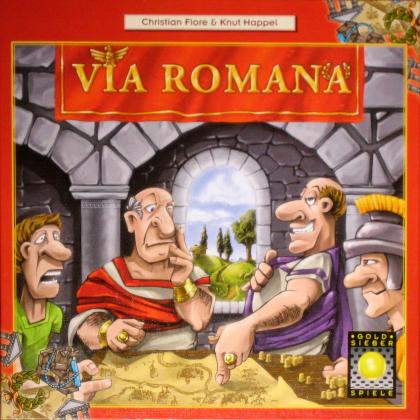 In Via Romana the players take part in the construction of the road system in the Roman provinces of Gaul. Through carefully planned streets and mighty forts they connect the most important towns and protect the Roman supremacy. They also compete to have the biggest portion in the construction of the province roads, to connect important towns and to build the mightiest forts.

By playing cards milestones are placed on the roads. Once all parts of a road from one town to another are occupied with milestones stones, the player with the most milestones may take one of the town-markers which provide victory points. The other players may draw cards from the open stock to get specific cards. More victory points are gathered through the value forts at game's end and by fulfilling certain missions.
valuations.

Via Romana provides tactical challenges despite easy rules as well as rich game components with many wonderful wooden meeples.