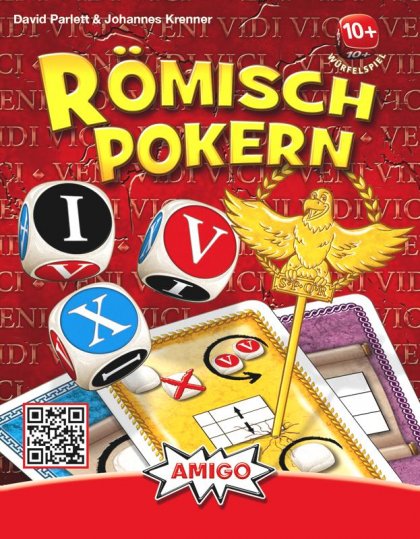 Roll dice as in Ancient Rome, trying to form the highest possible Roman numerals from your results. But don't be too quick to roll for the highest value because &quot;Alea iacta est&quot;; the dice might no longer form a valid Roman numeral. What's more, the results you roll must be placed in ascending order on the scoresheet.&#10;&#10;In R&ouml;misch Pokern, each player gets six action cards. On your turn, you first roll a die. After each roll, you must decide whether to stop or to continue by rolling an additional die. You may continue to roll as long as your results can still form a Roman numeral. If you end your turn with a valid number, this number is noted in your column of the scoresheet. You can decide in which of the seven rows the number gets written. The only restrictions are that the numbers must be in ascending order from top to bottom, and you cannot repeat a number.&#10;&#10;If you rolled an invalid number, or the number is already in your column of the scoresheet, your turn ends. All is not lost, though! You can still use your action cards to turn a bad roll into a good one; however, you must make this choice carefully because each action card still unused at the end of the game provides bonus points! The game ends when someone has seven numbers in their column of the scoresheet, and the player with the most points wins.&#10;&#10;