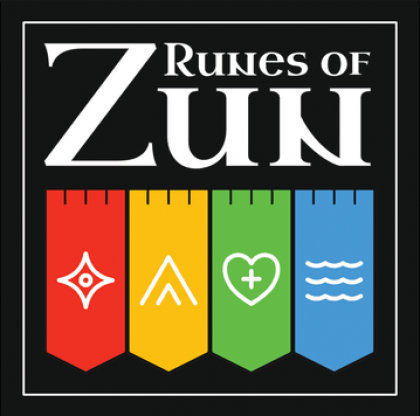 Play as a Runecaster in the realm of Zun. Magic runes from a long-forgotten war fill the land. You are one of few with the gift to control them. With skill and a little luck, you may turn the tide!&#10;&#10;Runes of Zun is a card-dueling game of magic and mayhem for two to four players. It's easy to learn and draws inspiration from collectible card games and deck builders but without all the fuss of collecting or building a deck.&#10;&#10;Part party game, part strategy game. It&rsquo;s like a collectible card game where everyone plays from the same deck. Play a two player duel, three to four player battle royale or team up and play 2v2.&#10;&#10;Combine rune cards to build huge combos. Play multiple actions on your turn, enhance them with modifiers, and defend yourself with reactions. Discover new ways to outplay your opponents!&#10;&#10;Each turn, play as many actions from your hand, one at a time, targeting your opponents. Play them with modifier cards to make your actions more powerful. But be careful. Your opponent is free to play a reaction card against your attack that could deflect it back to you or make your opponent stronger. At turn end, discard all your played cards and draw up to five cards. The last player standing wins!&#10;&#10;