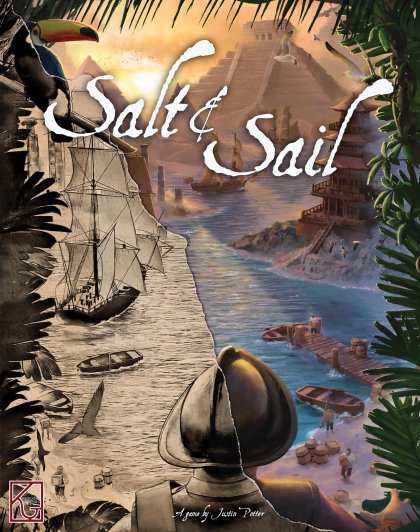 The capital is abuzz with strange tales and exotic rumors of ancient cities and remarkable wonders to behold. As the captain of your small ship, you have one goal: to follow the rumors, make the discoveries, and bathe in the fortune and glory that comes with it! Will you have what it takes to become the world's most famous explorer?&#10;&#10;Salt and Sail is an exploration and discovery game, set during the great Age of Sail. 2 to 5 players take on the role of an intrepid captain, in search of fame and fortune. Along the way, you will hire Officers to assist you, purchase new ships and unique tools, and sell goods and treasure to fund your expeditions. But, be careful--possible encounters with pirates isn't your only concern: the other player captains are trying to make those rare discoveries first and steal the glory for themselves!&#10;&#10;&mdash;description from the publisher&#10;&#10;Core Game Mechanics:&#10;- Modular hex board that is constructed based on various maps included in the rulebook. These maps provide various ways to play the game and customize game length and depth based on player count and time allowances.&#10;- Bag draw. Players use a Skill Bag with tokens to dictate success instead of using dice. The bag can be modified to augment a player's success with a particular skill.&#10;- Variable player powers. Players can recruit Officers with unique abilities and skills, purchase new ships with different strengths and weaknesses, and even equip said ships with tools to further augment their power.&#10;- Emphasis on discovery. While there are elements of adventure (fighting pirates, navigating through storms) that will cause players to react in various ways to overcome, and even some economics to drive item acquisition, the core concept is to use Rumor cards and reach various tokens on the board, wherein players can attempt to make Discoveries. It is through these discoveries that players will generate the most Fame Points (Victory Points).&#10;&#10;