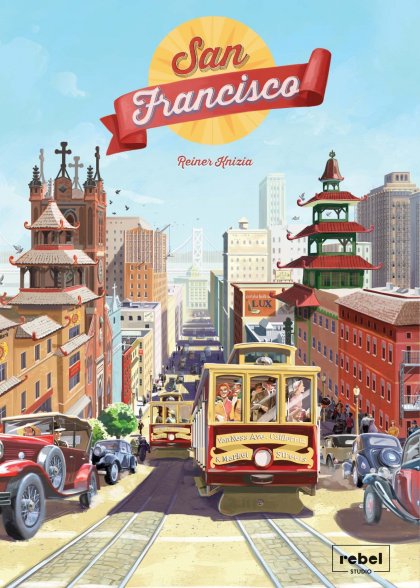 For San Francisco, the first half of the 20th century is an era of dynamic growth and new opportunities. It's also a chance for you &mdash; junior urban planner &mdash; to take part in a contest for the most amazing reconstruction plan of the city. Sit down with your sketchbook and create a project that will make you stand out from the competition. Design a beautiful city in this game by Reiner Knizia, world-famous board game designer.&#10;&#10;In the board game San Francisco, you become an urban planner whose goal is to create the greatest redevelopment plan of the famous city in California. Design districts in each of the five types, racing against all the other planners. Choose the right moment to take on new projects &mdash; but be careful, if you take on too many projects it'll be harder to gain more. Earn more prestige by cleverly designing a system of cable car connections. Lay foundations and carefully design the nearby landscape, allowing you to build new skyscrapers. Create a new vision of San Francisco that will gain the most rewards, and win through fame and recognition.&#10;&#10;