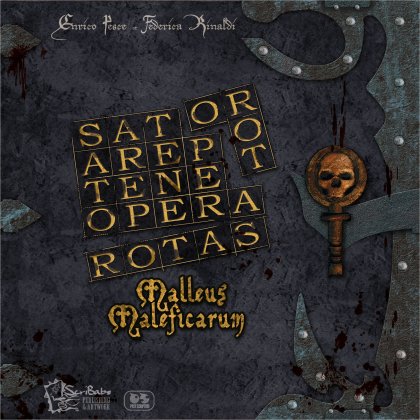 Sator Arepo Tenet Opera Rotas: Malleus Maleficarum, a new version of Sator Arepo Tenet Opera Rotas, appears seven years after the original game and it contains the new Malleus Maleficarum expansion.&#10;&#10;In Sator Arepo Tenet Opera Rotas, players must use their cards to move and rotate footbridges and create paths where their monks can move to recover the lost books. Each player also has their own set of Liber Fidei cards that allow them to perform special moves. Each such card can be used only once per game. The first player to recover all their books wins.&#10; &#10;The Malleus Maleficarum expansion adds a new set of rules in which players can discard cards during other player's turns to move the ghost of the Black Monk on the board. The ghost curses every player it meets during its wandering in the ancient room. Players can also decide to gain curses to play their Malleus Maleficarum cards, which are very powerful, but beware: Curses cause players to play with fewer action points or fewer cards!&#10;&#10;