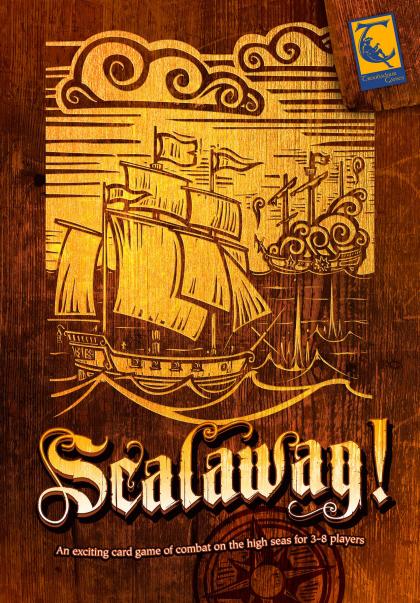 Cannon smoke drifts heavily across your bow, obscuring your view of the battle strewn across the seascape. Several ships are locked in a fight for naval supremacy. Sailors climb the rigging as you command your pilot to steer windward, taking the weather gage on the closest ship- gaining superior position. As your gunners open fire with cannon, you call out to your marines to prepare for boarding!

Scalawag! is a competitive card game for 3-8 players. Each player is the captain of their own warship with the goal of eliminating all other players (or teams during Allegiance Play). Game play consists of a player issuing one Captain’s Order each turn, generally allowing them to either gather additional Compass Points (the game currency) or spend Compass Points to attack their opponents.

Players support their Captain’s Orders by declaring Crew. As a player’s Crew Cards are kept hidden from others and bluffing is allowed, knowing when to bluff and when to call a bluff (by calling out Scalawag!) is an important element to successful play.