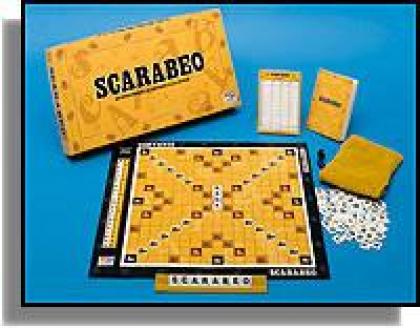 In this classic Italian word game, players use their eight drawn letter-tiles to form words on the gameboard. Each word laid out earns points based on the commonality of the letters used, with certain board spaces giving bonuses. But a word can only be played if it uses at least one already-played tile. This leads to slightly tactical play, as potential words are rejected because they would give an opponent too much access to the better bonus spaces.
Aldo Pasetti self-produced the game and was sued by the publisher of Scrabble, that has very, very similar board, tiles and rules. The trial took place in the late '50s and ended with a verdict of acquittal on the basis that game mechanics are not relevant and no confusion can be made between a long name as "Scarabeo" and a short one as "Scrabble", so it is not even unfair competition. Editrice Giochi had waited for the definitive acquittal: after that, it published the game.