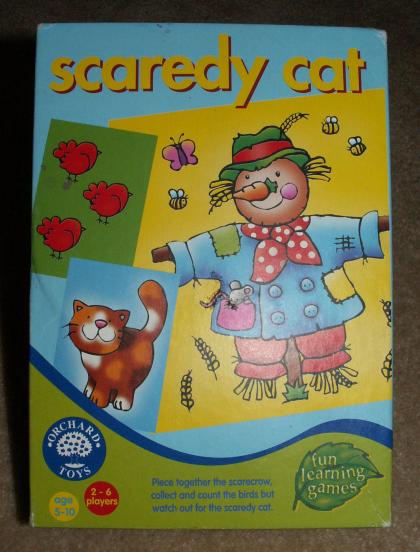 "Piece together the scarecrow, collect and count the birds but watch out for the scaredy cat."

Scaredy Cat is a children's game for two to six players Ages 5 - 10. The object of the game is to collect cards with birds on them. the winner is the player who has the most birds when the game ends.

To set up the game, all the cards are shuffled together and placed face down on the table. Players take it in turns to draw a card

There are three types of cards in the deck:

Most of the cards in the deck are Bird cards which have a picture of one to six birds on them. When a Bird card is drawn, the player puts it on the table in front of them.

The six Scarecrow cards each have a different part of a picture of a scarecrow on them. When one is drawn, it is placed in the middle of the table. When all six pieces are on the table, and the scarecrow is complete, the game ends and the birds are counted.

At the end of the game the birds on all the bird cards on the table are counted, the player with the most birds wins.

We have found that the game works best with three or more players. Two player games tend to go on for a long time with much frustration.