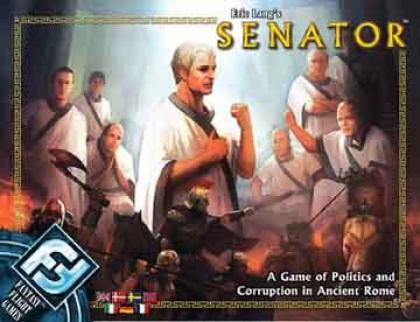 The Fall of the Republic is at Hand!
Senator is a board game for 3-5 players in which players take the roles of powerful Roman statesman. In this game of diplomacy, backstabbing, and resource management, players seek simultaneously to protect Rome, advance their family, and ultimately abolish the power of the senate and claim the title of Caesar.
The ancient world of the Roman Republic was a tumultuous and dangerous place. In Senator, Rome will be faced with a myriad of challenges, such as economic turmoil, revolt, plague, and the wars against Rome’s many enemies. As senators of Rome, players must work together to resolve the dangers facing the Republic while plotting their own devious agendas.

In the quest to become emperor, will you risk the Republic itself?