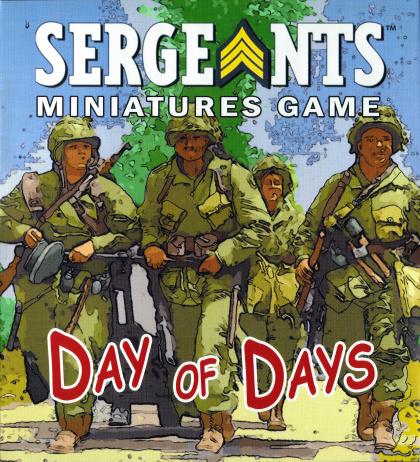 This game combines elements of boardgames and miniatures, in a system that is card-driven. Cards drive the impulses that take place during each turn, and each player has a deck of cards, made up from the troops under his or her command. Each soldier's "deck" of cards reflects abilities and traits-- perhaps about how well they shoot or how slowly they move or how attracted they are to things like fresh milk, hot food, or loot. There are some Soldiers (called "Characters") included in the base game (Day of Days) which are common, but the others in DoD and all that are purchased separately have unique characteristics (which all balance out to be "equal" according to a complex math formula which is seamless to the players). So players can only get the best out of their forces after they have learned each soldier's strengths and weaknesses. "Day of Days" includes moveable mapboard tiles, hand-painted 20mm miniatures (by FAA), scenarios, cards (several decks!) and everything needed to play. Additional Soldiers give more choices and more fun.