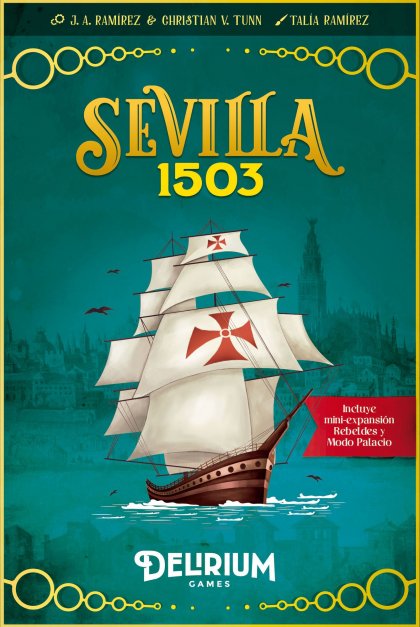 Sevilla 1503 draws inspiration from the most important city in Spain and Europe for two hundred years. All the commerce towards the route to the Indies flowed from its port. Many merchants and noble families travelled to Seville in search of wealth and adventure. Now, you can embark on the most advanced ships and go across the ocean to the Americas from the city with the brightest sun, the largest cathedrals and the bravest sailors in Europe!&#10;&#10;Sevilla 1503 is a set-collection and auction card game. For eight rounds, players will compete against each other with blind bidding and a re-bidding phase to get sets of cards they must embark on their ships. In addition to the crew, goods, officers and ornaments, players must get a fleet with enough capacity to ship the cards they have won. If they don't have the necessary slots, they will be forced to leave the goods in the port.&#10;&#10;At the end of the game, players will combine the cards they acquired to get as many victory points as possible and ship them on their fleet.&#10;&#10;&mdash;description from the designer.&#10;&#10;