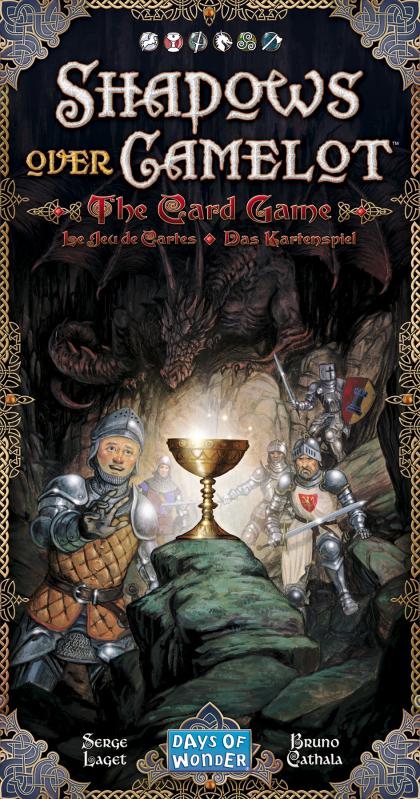 Shadows over Camelot: The Card Game

The Knights of the Round Table must assemble once again to protect King Arthur's kingdom from numerous threats. But wait – these aren't the knights of old, but rather their children. Can these newcomer knights prove up to the task of tracking the dangers out there and putting a stop to them before it's too late?

In Shadows over Camelot: The Card Game, the players (mostly) work together to complete quests before the danger level of a quest gets too high.

In game terms, the quests are represented by five types of cards, with each card showing 1-3 swords, as well as a number from 2 to 5 or a question mark. These cards are shuffled together with Morgan le Fay cards (which curse the players when they appear) and Merlin cards (which remove some aspects of the curse) to form the rumor deck. Each player receives a secret loyalty card at the start of the game, with at most one person being a traitor to the cause. On a turn a player either:

Reveals a rumor card.
Attempts a quest.
Accuses a knight.

To reveal a rumor card, the player flips it onto the top of the revealed stack of cards. If it's a quest card, players try to keep track of the total value of cards from that quest, with ?s each worth as many points as the number of ?s revealed of that quest. If a Morgan le Fay is revealed, players can no longer speak to one another; in addition, Morgan twists the values of some cards or removes some from play. Merlin allows players to speak once again.

Players are trying to stop quests when the total value is 11, 12 or 13. Any lower, and they arrived too soon, wasting time; any higher, and they arrived too late. To attempt a quest, the player points to the top quest card and says, "It's time." The player then reveals all cards in the deck. If the sum of that quest is 11-13, then the players receive 1-3 white swords, as shown on the quest cards. If lower, they receive one black sword; if higher, 1-3 black swords. All other quests are checked to see whether the players were too late, then the stack resets. A failed quest rewards the attempter with a special bonus card for later use.

Once three swords have been claimed, whatever the color, a player can choose to accuse another player of being traitorous to the cause, winning a reward if correct and a penalty otherwise. If the players collect seven white swords, they have stopped Morgan's forces and win. If, however, they collect seven black swords first, then Arthur's kingdom falls.

Voti e commenti per Shadows over Camelot: The Card Game