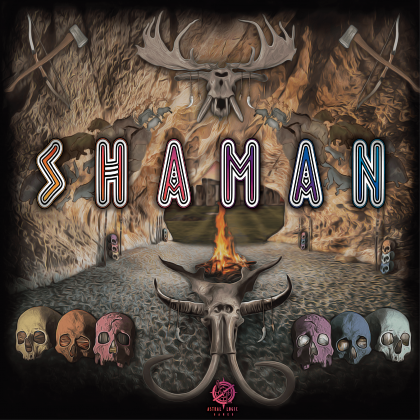 12,000 years ago: the world is volatile, as are the prospects of survival for you and your tribe. A Shaman begins their duty as just a youth, but must be wise beyond his or her years in order to grow, expand and thrive as a tribe. As the spiritual leader you will decide when and where your tribe should hunt, gather, settle, build and more. The best Shamans commune freely with the spirits, animals and nature itself, but this path is not always peaceful, beasts will be slain and foes will be vanquished. Will your tribe grow and thrive or merely survive?&#10;&#10;You are the Shaman leader of your specific tribe. Each Shaman has a collection of skulls in which they may commune with the spirit world. You must use these skulls to take actions, or harness a beast spirit, or even create and collect totems for bounties at your life's end. The actions you choose will tell your tribe to move, engage, grow, or worship, each having its own set of choices. In doing so, you will collect resources from the land to feed your tribe, to develop technologies, to build resources, make offerings to the great spirits, activate skulls and more. As the Shaman you must be wary of impending catastrophes known only to you and the other Shaman of the world. The Shaman whose tribe has the largest population is winner.&#10;&#10;A tribe's total end game population consists of their total token dial amounts (rovers, warriors, villages), their totem bonus amounts, and any end game bonus population. The population represented by the dials underneath your tokens on the board will be the main portion of your score.&#10;&#10;-description from designer&#10;&#10;