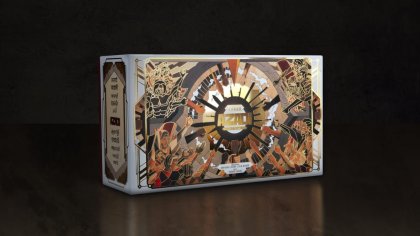 SHASN: AZADI is a semi-cooperative political strategy board game where players play as revolutionaries, trying to free their country from the grips of a tyrannical imperial power. If they succeed, only one will emerge as the leader of the new nation.&#10;&#10;Each player must work with their compatriots to topple the Imperials and gain freedom for their nation. But every time a player takes a turn, the Crown will march forward and the Imperials will take a turn, launching devastating attacks against the revolution.&#10;&#10;Players can combat the Imperials by resolving Azadi Cards. From Jallianwala Bagh to the battle of Yorktown, each Azadi Card is a unique event from history.&#10;&#10;Each Azadi Card has two sides, presenting players with two divergent paths of resistance. Will players take the path of peace and sit on a hunger strike, or will they take up arms and assassinate their oppressors? Each choice in an Azadi Card belongs to a certain Ideologue. Players must choose their path wisely, for their choice will unlock a new zone, and a Resistance Card belonging to that Ideologue, strengthening that Ideologue for the rest of the game.&#10;&#10;For every action you complete on an AZADI Card, you will gain legacy. Spend your legacy to erect Monuments to your sacrifice and earn new powers once your nation gains Azadi. If players resolve the number of Azadi Cards required by their difficulty, and a final Foundation Card before time runs out - Azadi will be theirs.&#10;&#10;But the new sovereign nation will need a leader. Players must compete in the first democratic elections of their country to see who will be declared winner.&#10;&#10;What will you stand for? And what will freedom cost?&#10;&#10;