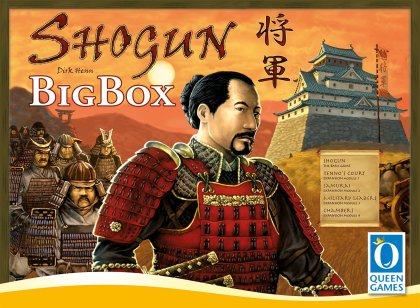 Shogun Big Box includes the base game of Shogun, Tenno's Court Expansion 1, Samurai Expansion Module 2, Military Leaders Expansion Module 3 and Chambers Expansion Module 4, with the latter three items being unique to this release.&#10;&#10;With Samurai, at the beginning of each round when you control provinces in at least four regions, you reveal a better card and pick a bonus from it. For this reason, the first card is de facto unused, and the rest provide you with either gold (2,4,6), rice (0,1,2), armies on the tray (1,2,3) or victory points (0,0,1).&#10;&#10;With Military Leaders, every player is given one military leader figure to place on one of their controlled counties. While performing actions in this county, they get extra benefits, such as costs of buildings are reduced by 1 or they earn one extra grain. At the end of a player's turn, they then move the leader to an adjacent county under their control, leaving a marker at the old location. If a player cannot place the leader adjacent to their county, they have to move it to any of their controlled counties, not leaving a marker behind. The more markers you have on the board at the end of the game, the more points will be awarded!&#10;&#10;For Chambers, many offices have to be taken in order to rule the land. For each region there are several positions to be filled by the players. At the beginning of each round, six chamber markers are revealed and placed on the corresponding spaces on the chamber tableau. These six positions are available to be filled in each region by the players. Whoever has the most counties under their control in that region will fill the position and exchange the camber marker on the tableau with one of their own player markers. At the end of the game, players are awarded extra points for majorities in horizontal and vertical lines on the chamber tableau.&#10;&#10;