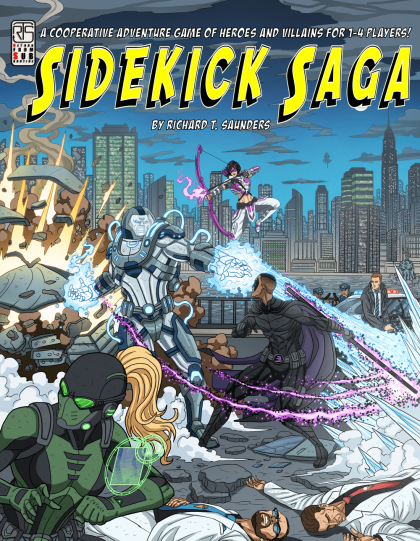 One morning, the city of New Dover woke up to discover that all the powerful Super Heroes had disappeared! Where did they all go? No one seems to know what happened to them! The Gangs, Thugs, Minions, and Villains of New Dover immediately noticed the power vacuum in the city and began to assert themselves. The city is reeling from their attacks! What can be done?&#10;&#10;The Sidekicks of the Super Heroes haven't given up the fight! They know they aren't as powerful as the Bad Guys, but they are courageous and resourceful. They know where the Heroes have helpful technologies, weapons, and devices. To help each other out, the Sidekicks have set-up supply lines between themselves to share useful things! They will protect New Dover! And maybe along the way, they can find out what happened to the Super Heroes...&#10;&#10;This is their story: this is The Sidekick Saga.&#10;&#10;Sidekick Saga is a cooperative adventure, combat, and exploration game for 1-4 players (ages 13 and up). It takes 60-90 minutes for one game. There is also an ongoing story to find the missing Super Heroes!&#10;&#10;For 2--4 players, each player takes control of one of the Sidekick characters in the game. A solo player will take control of two Sidekick characters and will play them both as if it were a 2-Player game.&#10;&#10;The players work together to defeat the current Villain and their Villain Forces. This is a cooperative game: the Sidekicks win or lose together! There is only one way to win (usually): the players must defeat the main Villain by reducing him to 0 Hit Points! There are many ways to lose!&#10;&#10;If all Sidekicks are defeated (reduced to 0 Hit Points), the Villain wins! Note: only 1 Sidekick needs to survive for the Sidekicks to win! Sometimes, other Sidekicks will take one for the team to defeat the Villain!&#10;&#10;If time runs out, the Villain has stalled long enough to bring his evil scheme to fruition, and he wins! This happens if the Villain is still alive at the End of Act III (when the last Bad News card comes out).&#10;&#10;If the City Terror ever gets too high (16 on the City Terror&#10; track), the Sidekicks lose!&#10;&#10;Sidekick Saga is a light legacy game of exploration (moving around the city), &quot;drafting&quot; (sharing cards cooperatively), variable player powers (each Sidekick has different powers) and hand management (playing cards appropriately), and combat (fighting bad guys). Players move around the city looking for weapons, ideas, leads, anything to help them take out the Bad Guys!&#10;&#10;&mdash;description from the publisher&#10;&#10;