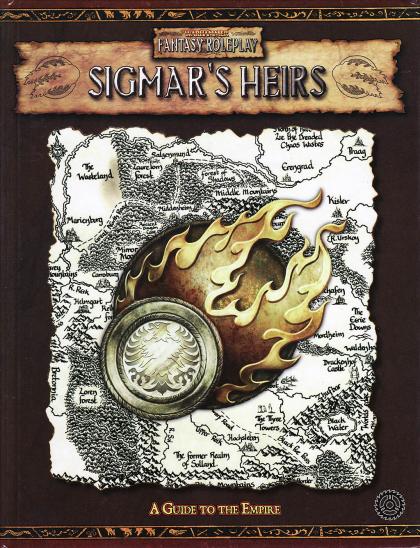 The Storm of Chaos has broken!

The Empire has survived another Chaos Incursion but there will be no peace for Sigmar's Heirs. The northern provinces have been decimated, tens of thousands are dead, cities and towns have been sacked, and famine and disease follow in war's wake. Throughout the provinces prophets of doom predict the end of the world, flagellants and zealots preach blood and redemption, and Chaos cults undermine the foundations of order. This is the Empire in the year 2522, at once the greatest nation in the Old World and the most vulnerable. While the Emperor pursues the shattered remnants of Archaon's armies, who will struggle against the enemy within?

Sigmar’s Heirs is the definitive sourcebook of the Empire. Inside its pages you’ll find:

A history of the Empire from the earliest days of Human migration to the present day.
Details on the political and social structure of the nation, including crime and punishment.
Full descriptions of each province, including gazetteers with details on important cities, towns, and villages.
New information on religion in the Empire.
8 new careers, including Exorcist and Gambler.
Ready-to-use NPCs and Adventure Hooks.
A new, two page mape of the Empire.
Ill Met in Bögenhafen, an adventure for characters in their first careers.

The Empire is the heartland of Warhammer Fantasy Roleplay and its portrayal is key to the success of any campaign. Sigmar’s Heirs is the sourcebook Game Masters have been waiting for.

For the Empire! For Sigmar!