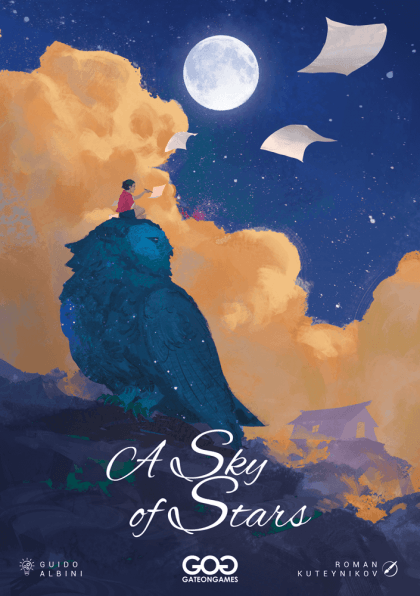 A Sky of Stars

When the day gives way to the night, Mother Nature stages one of the greatest shows that man has ever witnessed. The night sky shimmers with a myriad of bright gleams: the stars. For centuries we studied their movements and tried to organize them into what we commonly call &ldquo;constellations&rdquo;. Evocative names for patterns in the sky that resemble objects, fantastical creatures, animals or ancient gods. Will you be able to locate your constellation and trace it in A Sky of Stars?&#10;&#10;Game Objective&#10;A Sky of Stars is a game that will engage players' imagination and their ability for abstract thought. Each player will link up the stars suggested by the Star Die, drawing the pattern of new constellations on his or her personal Sky. Each creation will then be reviewed by the other players, who will have to find out what object is represented in each Sky. The player that creates the best patterns and is able to interpret those of the other players is going to win the game.&#10;&#10;A Sky of Stars is a original roll-and-write game, with a funny guess-mechanism. Try to design your best constellation while all other players try to figure out what it is!&#10;&#10;&mdash;description from the publisher&#10;&#10;