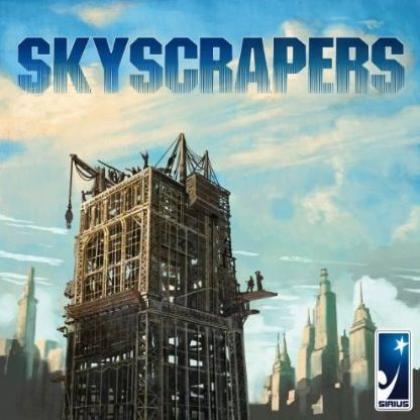 Thanks to its innovative 'plug-in' mechanism, Skyscrapers will have players erecting ever higher skyscrapers in this exciting building game. But it's not quite that simple as not all of the components have the right form – and players can try to use their construction workers on the lower floors to block out others.

Players have 5 workers, and are dealt a hand of building tiles. The tiles, in combination with rivets which fit through holes in the center, create a 3-dimensional construction. The tiles have grids in various configurations, and some have a construction worker. On your turn, take 3 actions. Options include placing a worker, moving a worker up a level, or building = adding a tile to the construction (which must touch the tile on which one of that player's workers is standing); score points = 1 per girder touching a girder already built, +1 if worker on tile, doubled if the new tile is now the highest built. There are penalties if you drop tiles or worker tokens, but otherwise you generally alternate taking turns adding tiles to the building.

The rivets are placed in an hole in the center of the tile and can be fitted to other tiles already in play. There are some (few) construction rules and the building will grow turn after turn. Where add tiles is an important decision but you also need a certain amount of precision and dexterity doing that because if you cause the fall of a worker (yours of opponent) you will loose points. Actually an important part of the game is placing your workers in a way that make much more difficult to opponents to add tiles.

The game ends prematurely if someone collapses the building; they lose, and whoever is furthest on the score track (after deducting points for tiles remaining in hand) wins the game. Otherwise, most points (after all tiles built) wins!