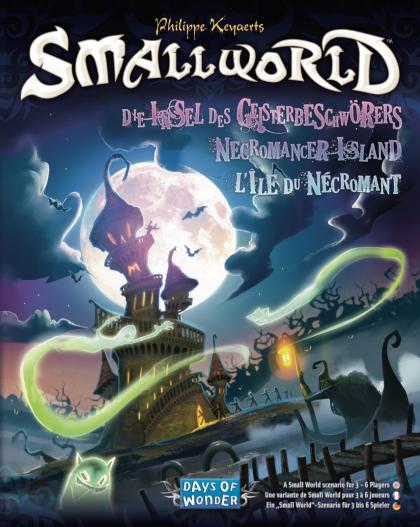 A Small World Scenario for 3 to 6 players

At first no one noticed the small island on the lake - nor paid any attention to the gnarly pretense of a man who drifted onto it, sitting astride a wooden log with a huge grimoire on his lap employing a shovel as his unlikely paddle. A ghastly green mist soon shrouded the island, wrapping it in a ghostly silence pierced only by a maniacal laughter and some intermittent curses. Then, one moonlit night, an impossibly crooked tower emerged high above the mist, casting a long and dark shadow on the surrounding land... The Necromancer had arrived!

In Necromancer Island, one of the players assumes the role of a dreaded Necromancer who inhabits an island in the center of Small World's central Lake region. He captures the souls of all Race tokens lost to conquests, using them to progressively spawn Ghosts who invade the surrounding Regions. To make matters worse, his Powers grow as his reach across the land increases. If the Necromancer succeeds in bringing all of his Ghosts into play, anytime before the game's end, he wins!

Necromancer Island is a free, limited-edition scenario available from game retailers worldwide and for purchasers of a Small World product from the Days of Wonder web store during November and December 2010 only while supplies last

Update December 2013 (Days of Wonders news)
http://blog.daysofwonder.com/2013/12/12/small-world-royal-bo...
"We also reprinted a batch of the long out of print Necromancer Island and an improved version of Leaders of Small World (now including all the races from the Small World Universe, up to the Royal Bonus) for our backers. After fulfilling these Kickstarter rewards, we found ourselves with a few extra copies which we are making available to Small World fans. So while stocks last (and we mean it when we say these are limited in number), you can pick up the new Royal Bonus expansion, Necromancer Island and Leaders exclusively from the Days of Wonder website. Please, note that this offer is limited to one copy of each expansion per order."