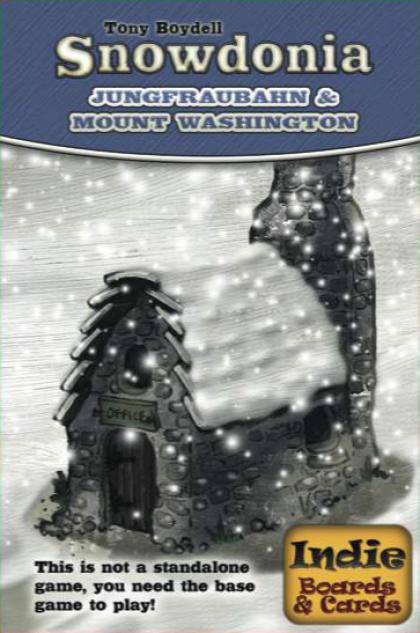 Snowdonia: Jungfraubahn & Mount Washington consists of two new scenarios for Snowdonia that take players away from the damp North of Wales and transport them (and their shovels) to more frozen climes! New mechanisms for the use of dynamite, new weather (snow) and new trains combine to provide a different playing experience. Jungfraubahn is a scenario for up to four players, with the yellow fifth player pieces being used as dynamite; the Mount Washington scenario handles up to five players with an amusing take on the "Surveyor". (Let's just say: "Wheeeeeeeeeeeee!") This expansion is comprised of a rulebook and a single deck of 66 cards containing:

The German version by Lookout Games was part of the Snowdonia: Erweiterung. It was sold in three shrinkwrapped card packages with 33 cards each.
It also included the expansions Bayerische Zugspitzbahn and Britannia Bridge.