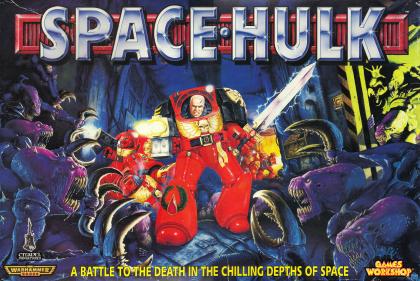 Combat is action point driven and resolved through the use of dice. The marines have a finite number of figures to use in combat against endless hoards of Genestealers. The object is to accomplish given missions within their parameters or die trying.

There were significant differences between the 1st edition and this one. The first being that this version or revision was by Dean Bass and Chris Colston and based on the original game by Richard Halliwell and Paul Murphy. The most significant difference in this version was the removal of the sand timer and thus the requirement for the marines to accomplish their turn in a limited real-time period. Also the rules of the 2nd edition did not allow the player of the Space Marines to perform actions by using command points in the turn of the Genestealer player. Another change was the addition of combat specific dice to resolve weapons fire and a special die to resolve gun jams. A few other minor changes were made to the rules and board graphics as well.

This version contains the initial six missions found in the first edition and adds an additional 12 missions which were different than those in the 1st edition of the Deathwing and Genestealer expansions.