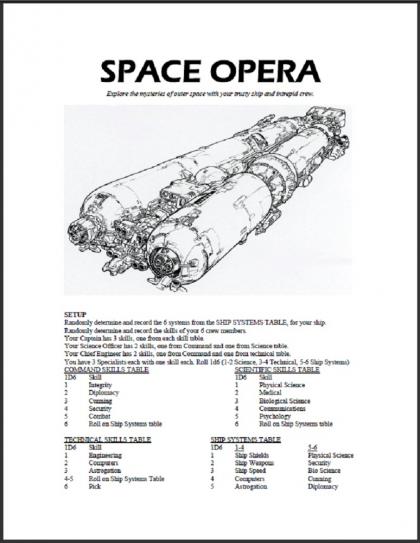 "Explore the mysteries of outer space with your trusty ship and intrepid crew."

The player is in command of a starship. The attributes of the starship and the skills of the crew are randomly determined by rolling on tables. The six member crew includes a captain, science officer, chief engineer, and three specialists (science, technical, or ship systems). The object of the game is to complete ten missions in the shortest time possible.

The game also includes three additional scenarios that expand on the basic game.

In the Drax Campaign scenario, the player must complete missions in order to win the war against the Drax. The player controls three starships. The attributes for these ships are generated by rolling on special wartime ship systems tables. Successfully completing missions makes a player victory more likely, while the failure to complete missions will lead to a Drax victory.