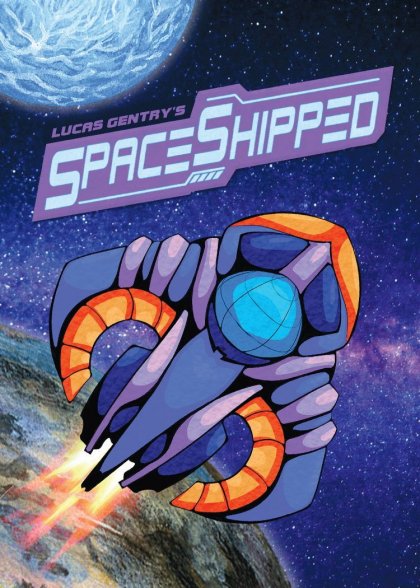 You are an interplanetary trader, flying a second-hand ship, trying to make some cash. A wealthy merchant offered you a lucrative deal. Prove yourself by getting some rare crystals and she'll put you in charge of her trading fleet &mdash; one of the biggest in the quadrant. You'll need to get them before your enemy gets them first. What are you waiting for? Get shipping!&#10;&#10;SpaceShipped &mdash; A solo space trading game of buying and selling resources, upgrading your ship, crew, and equipment, dealing with pirates, and making deals. A card game with over 30 random events, 4 types of ship, 4 sets of crew members, and 8 different pieces of equipment to install, all using only 18 cards packed neatly in a little wallet.&#10;&#10;Your goal: Make enough money through your buying and selling of resources to be able to afford two very expensive exotic stones (three, if you're really daring). At the same time you're trying to do it, pirates are working hard to collect them as well. If they get to them first, or if your ship takes enough damage, you lose.&#10;&#10;As if the pressure from the pirates wasn't enough, on each turn, you'll pilot your ship to different planets, experiencing random encounters, solar winds, and violent attacks. Spend too much time repairing your ship and the pirates will steal the crystals first, but don't repair your ship enough and it will likely be destroyed by these attacks. Hire the right crew, buy the right ship, fit your ship with the right equipment, and you just might make it out of the galaxy alive.&#10;&#10;&mdash;description from the designer&#10;&#10;&#10;Released in the July 2019 Board Game of the Month Club $20+ package.&#10;&#10;