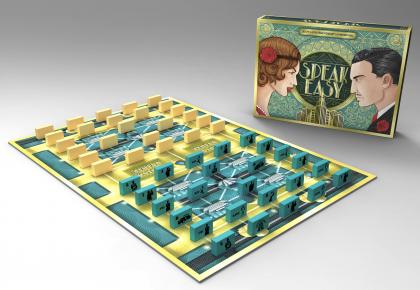 It's the 1920s during the time of Prohibition and its famous speakeasies. Will you succeed in finding your opponent's speakeasy with your clan of gangsters before he finds yours?

To set up Speakeasy, each player places his 25 pieces on the game board with the values visible only to him. Players then take turns moving along the streets and alleys, even entering the buildings that serve as a "stash". When two pieces meet, the piece with the highest value scares away the opponent, removing him from the city. Special pieces move faster than others or scare away all opponents before disappearing themselves.

Inspired by Lu Zhan Qi, a Chinese game that has proven its excellence for many years, Speakeasy requires memory and anticipation in games full of bluffing.