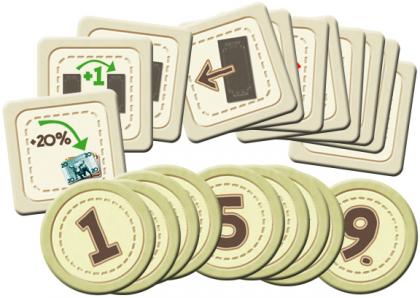 Speculation Queenie 1: New Action and Movement Tiles, a mini-expansion for Speculation, can be used individually or in combination with any other expansions for the game.

This expansion consists of twelve action tiles and twelve movement tiles that can replace or be added to the tiles in the base game. Although which action tiles to add or replace is left up to the players, the expansion provides three recommended scenarios. The new actions include the forced passing of one card to another player, ignoring a bank holiday card, accrual of interest, payment of tax, forced purchases, forced sales, and dividends.