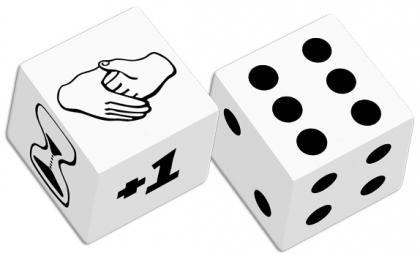 Speculation Queenie 3: Action and Movement Dice, a mini-expansion for Speculation, can be used individually or in combination with other expansions for the game.

This expansion consists of two dice: one a movement die showing the values 1-6 and the other an action die showing "Trade" on three faces, "+1" on one face, "-1" on one face, and a sand timer on the final face. Instead of using the action tiles or movement tiles from the base game, you can use one or both dice. This change replicates the original game self-published by designer Dirk Henn and adds more randomness to the game as the same movement value or action can appear repeatedly instead of the action and movement tiles being "used up" until the tile bags are reset during the game.