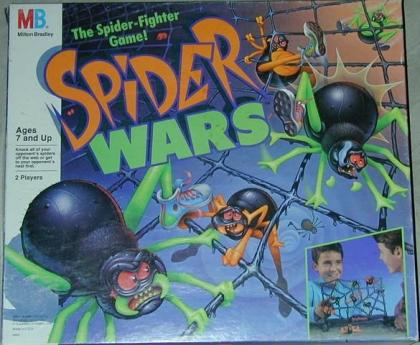 This abstract game cleverly exploits its theme of warring spiders to introduce children to thinking games. The board represents a web with two nests at opposite ends, and stands up between the players. Each player uses his side of the board to move his spiders on (three small ones and a large one). Each spider has two long flexible legs with which it steps over the web; each leg ends in a peg which fits into holes in the web. The catch is that if you insert your peg in a hole occupied by an opponent's spider, it pushes his peg out. A spider hanging by only one leg is a "dangler" and is in danger of being pushed off the web altogether (and out of the game) should the opponent push its other leg out. Re-attaching a dangler uses up one's entire turn.

The object of the game is either to eliminate all of the opponent's spiders or put a leg in his nest.

On your turn, you move two different legs, belonging to the same or two different spiders. The small spiders' leg span confines them to adjacent holes. The big spider, the Daddy Long Leg, has a greater span and can use holes two spaces apart. A move consist of detaching a leg, pivoting around the other, and plugging the free leg back in.