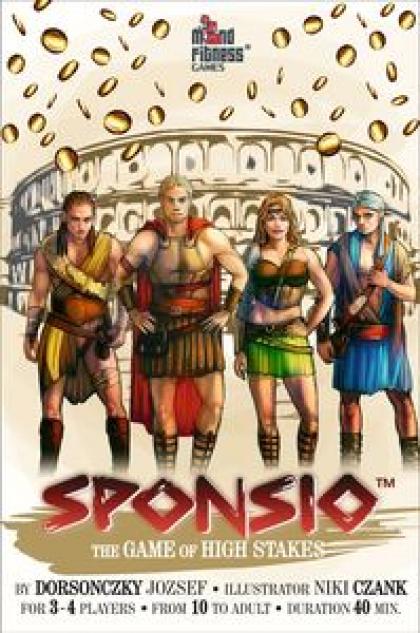 Descrizione tratta da Boardgamegeek:
Time to take part in the greatest battles ever with your gladiator cards and try to win fights by taking tricks…or not because earlier you placed bets against them.

Sponsio is played over several rounds. At the beginning of a round, each player has four turns to set their own scoring and goals for the trick-taking that follows, and this is mostly done by betting. Players can bet on tricks taken, on the number of cards of a given color in your takes, on the last trick, on the highest card taking, or even on the failure of your opponent. Instead of betting, players can choose other actions as well.

Players can have up to four bets, but only those that you've won will earn you coins. For this reason and because the odds of the bets differ (x2, x3, x4, x5), sometimes instead of betting players will want to take other actions, such as changing one of their cards, doubling an odd, becoming the starting player in the trick phase, changing one of their bets, etc. This is where the tactical depth of Sponsio comes in: finding the best combinations to build your highest score!

Sponsio is a family-strategy game that can be won in two ways: collecting 30 coins or winning 9 bets in a row.