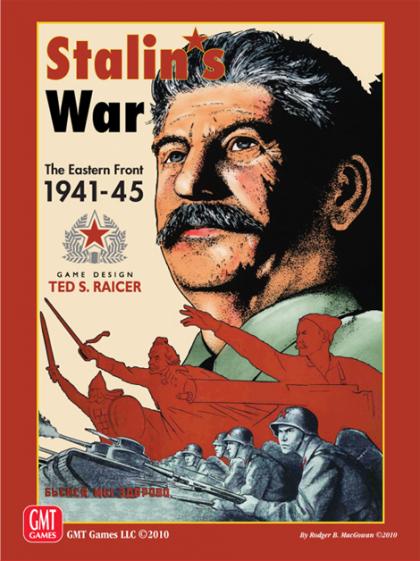 From Ted Raicer the award-winning designer of Paths of Glory and World War II: Barbarossa to Berlin comes a fresh new look at the most titanic and brutal land campaign ever waged, the war between Hitler's Germany and Stalin's Soviet Union.

Stalin's War is a unique card-driven, hex-based game, a combination that allows players to experience a broad range of strategic and tactical options as they maneuver their forces across a large hex map that stretches from Berlin to the Urals.

Stalin's War allows player to recreate WWII's greatest battles of encirclement as Axis Armies and Panzer Corps clash with Soviet Fronts and Armies on a front a thousand miles wide. Simple but effective rules allow you to use your mechanized forces to blitz the enemy's front line and exploit deep into your opponent's rear. Can you as the Soviets survive the slashing Panzer attacks of Operation Barbarossa and Case Blue in 1941 and 1942? Can you as the Axis player stand against the crushing Soviet Deep Battle operations that destroyed Army Group Center in 1944? Stalin's War will test both player's operational skills to the limit.

But there is more to Stalin's War than directing your forces on the map. Both sides have their own deck of 55 cards, needed to launch offensive operations, mobilize their forces, replace losses, introduce new weapons, and deal with the larger strategic context of a World at War. Card Events include combat leaders, weapons (from German Tiger Tanks to patriotic Soviet mice nibbling the electrical wiring of the panzers), the 1944 Warsaw Uprising, Manstein's Backhand Blow, Stalin's and Hitler's meddling, the Battle of the Bulge, and much more.

Stalin's War allows players to combine the best of WWII operational play with the strategic depth and tactical chrome of a card driven design. A genuine new look the the most important theater of WWII, this is a game you want to play again and again.

(Taken from rear of the game box)

Scenarios
In addition to the full campaign game, a shorter tournament scenario is included that comprises 8 game turns and covers the time period of June 1941 through to Winter 1943.

Link to Stalin's War page on the GMT Website.
An interview on Boardgame News with Ted Raicer regarding the game.