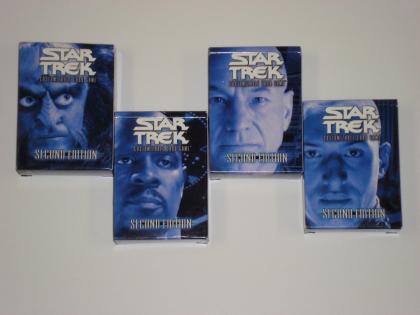 Star Trek CCG 2nd edition is a reinvention of the original star trek customizable card game. One major difference in Second Edition was the addition of a cost system to equipment, events, personnel, and ships. A card's cost is listed in the top left-hand corner of a card, directly preceding the card's title as a single digit number (currently anywhere from 0 to 9). A player receives seven 'counters' at the beginning of each turn; to play a card, the player must spend a number of counters equal to the cost of the card. Only interrupts (of the card types in a player's deck) do not have a cost and are treated as 0-cost.Another major change in the gameplay of Second Edition was the new method of handling dilemmas. Instead of using First Edition's lengthy procedure of a 'seed phase', which could last upwards of 15 minutes, Second Edition employs an 'on-the-fly' method for constructing dilemma combinations. While First Edition attempted to sometimes literally represent instances from the Star Trek universe in the game, Second Edition has focused more on a consistency of gameplay as a priority over design consideration with regard to remaining faithful to the source material. Effects on cards sometimes lack the "Trek sense" that First Edition cards contained and can be purely conceptual, but are generally much more equitable when compared with other similarly costed effects.