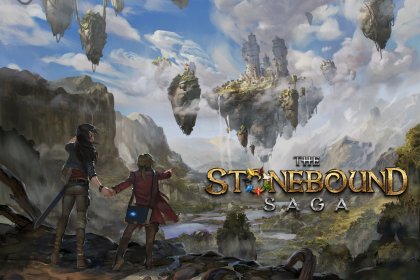 Description from the publisher:&#10;&#10;Centuries have passed since the great city of Lux disappeared into the sky. Since then a force known as Tenebris has enveloped the seven kingdoms of Telios in darkness. After an endless age of war humanity was on the verge of destruction &mdash; but just as the last light was fading away from the land, when humanity was on the brink of ruin and all seemed lost, hope broke through.&#10;&#10;Three adventurers made their way to the great valley where the ancient city of Lux used to stand. They were drawn by the very stones in the land which seem to call out to them. These stones soon became known as speaking stones as they were able to speak into the very souls of the adventurers, granting them power to push back the Tenebris. Once they arrived they found out they were not the only ones summoned by the stones.&#10;&#10;The Stonebound Saga is a skirmish style card game that offers a variety of elements such as resource management, dice rolling, card positioning and tactical gameplay. The game is for 2 to 6 players played on a large grid-based playmat. Matches take 45 minutes to an hour to complete.&#10;&#10;Each player begins the game with a group of adventurers who have made their way to the valley to train and prepare for the upcoming battle against Tenebris (Standard play is 3 characters per player). Throughout the game players will use speaking stone cards drawn from a community resource deck in order to perform various abilities in battle.&#10;&#10;The Stonebound Saga is a great mix of unit positioning and strategy requiring each player to carefully plan their turns and manage their resources to achieve victory against their opponent. With a large number of character cards to fit many play styles, each match is always a unique experience.&#10;&#10;