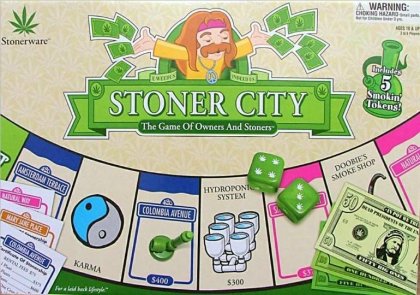 Yet, another Monopoly (q.v.) clone with a marijuana theme. The differences between this and the older game are: players start with $1650 (instead of $1500), it only takes three of this game's version of houses to upgrade to this game's version of a hotel, there is a Police Car token that moves on everybody's turn in the opposite direction of the players. When the Police Car occupies the same space as a player then that player is sent to Rehab (this game's version of Jail).&#10;&#10;Includes: Game Board, 5 Player Tokens, Play Money, 36 Kharma Cards, 27 Certificates of Stonership, 1 Police Car, 15 Plant Pieces, 32 Crop Pieces and 2 Stonerware Dice.&#10;It appears that this game was produced without a Certificates of Stonership card for the Cheech's Bail Bonds space.&#10;&#10;