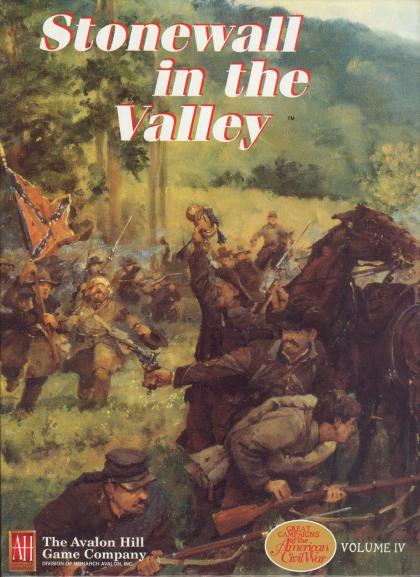 Stonewall in the Valley

This is the fourth game in the Great Campaigns of the American Civil War series. It covers the Shenandoah Valley campaign.

Stonewall in the Valley is the fourth volume in Avalon Hill's series on the Great Campaigns of the American Civil War. Most other Civil War simulations portray specific battles, but Stonewall in the Valley concentrates on the full campaign in the Shenandoah from March to June 1862. The Union player's objective is to maintain control over the key regions of the Valley; the goal of the Confederate player is to drive the Federals out.

Stonewall in the Valley is easy to learn and several scenarios can be played to completion in an hour. The game contains three beautiful hand-painted maps, which are based on original Civil War period maps of the Shenandoah Valley. All topographical features affecting military operations are portrayed, including roads, pikes, trails, railroads, villages, mountains, and waterways. In the game, players control Union and Confederate military units in turns repr esenting one day of real time, The game's interactive game system assures that each scenario will be unpredictable, exciting, and competitive. An extensive historical article detailing the day-to-day activities of the real campaign is included.

You do not need to own any of the three earlier volumes of the series (Stonewall Jackson's Way, Here Come the Rebels!, and Roads to Gettysburg) to play Stonewall in the Valley. However, owners of those games can link their maps to the Stonewall in the Valley maps to portray virtually the entire eastern theater of the Civil War.

Time Scale: One day per turn
Map Scale: One mile per hex
Unit Scale: Brigades and regiments (with district leaders)
Players: One, two, or teams
Playing Time: One hour for introductory scenarios, 2 to 14 hours for other scenarios

Voti e commenti per Stonewall in the Valley